These 3D-printed houses are made with a dirt cheap material

Mud, to be precise – on-site soil, along with bits of rice, and hydraulic lime 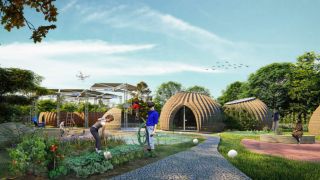 WASP, an Italian 3D printer maker, has just announced a collaboration over a new housing model to build eco-house communities in a sustainable manner, using reusable materials taken from the local terrain – in other words, mud (partly).

In actual fact, the houses are built with the Crane WASP 3D printer which constructs the eco-abodes on-site using 25% soil from the ground right there, as well as 40% straw chopped rice, 25% rice husk, and the remaining 10% is hydraulic lime.

The 3D printer manufacturer is now collaborating in the TECLA project with a Bologna-based firm, Mario Cucinella Architects, to develop a model for a ‘sustainable global habitat’.

The vision for TECLA is a sustainable housing model which could be used as the basis for creating what are described as autonomous eco-cities.

The Crane WASP – which can be dismantled to be moved to a new site, then reassembled to build more houses – has already 3D-printed a house made with raw earth measuring 21.6 feet in diameter, and standing 9.8 feet tall.

Massimo Moretti, WASP CEO, told 3D Printing Industry: “WASP takes inspiration from the potter wasp. We build 3D printed houses using earth found on the spot, under a sustainable perspective. The oldest material and a state of the art technology merge to give new hope to the world.”

In the big picture, the idea is that these eco-house communities could provide a solution to explosive population growth, and the subsequent lack of ability to provide homes for those growing populations.

A prototype 3D-printed habitat of eco-houses is already underway, being built near Bologna in Italy, and it should be completed by early 2020. The images on this page are concept renderings, of course, except for the above photo of an actual 3D-printed earth wall section.

Fluorescent light bulb sales can be banned in South Africa